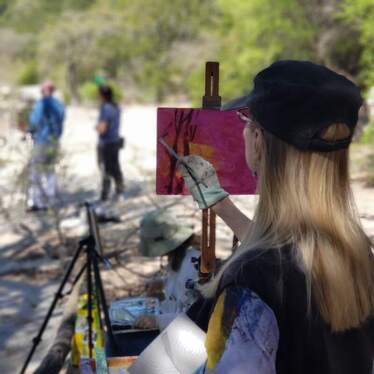 Plein Air Austin (PAA) was loosely established in 2001 by a group of Austin artists who had been meeting regularly to paint in the many local parks and natural areas for which the Texas Hill Country is celebrated. The artists casually called themselves Plein Air Austin and even put together a few exhibits, including a significant group show in Santa Fe in 2003.

Late in 2005, Terri M. Wells had a vision of a more structured group to promote painting directly from life with paint outs, exhibits, and fellowship benefiting artists and the community. In 2006, a board of directors was established, and membership was formalized in the hope that the group would flourish and become a respected organization representing talented outdoor painters in Texas and beyond. In 2007, PAA gained its 501(c3) nonprofit status.

Since the beginning, Plein Air Austin has welcomed artists of every skill level.
PAA currently hosts approximately 4 monthly paint outs in Austin and around central Texas. It also hosts demos, workshops with local and nationally known instructors, provides networking opportunities, regular member shows, an annual family picnic, and an annual painting retreat in Texas. Portions of our annual membership fees are used in support of the ARC of the Arts Program at ARC of the Capital Area and other local charities.